How to set up Zalenium with Kubernetes on Linux

At the project I’m currently working on we decided to move away from SeleniumGridExtras around September 2018. Since may 2018 the SeleniumGridExtras project is no longer maintained by its owner and they are asking for someone to take over his work. We considered to take ownership of SeleniumGridExtras but saw that there were better solutions in the market. So, to keep a long story short, after some comparison we decided to make use of Zalenium. This blog is about setting up Zalenium on a bare metal Kubernetes setup which consists of 1 master and two workers. All installation instructions are based on Ubuntu Linux. This blog is not about making it secure and perfecting the setup, just to make it work for you.

There are a number of reasons to prefer Zalenium over the standard Selenium grid and even over SeleniumGridExtras. Because Zalenium is totally dockerized you can just run it by using a simple docker run command. Automatically it will spin up two other docker containers (if you do not differ from the standard configuration) that both contain one instance of Firefox and Chrome as a browser. When the demand of one of these browser will increase more docker images will be started to fulfill the demand. Biggest disadvantage of this practice is that it will also put a lot of load on the machine running many of these containers. Luckily Zalenium supports Kubernetes so we can distribute the load of containers over multiple machines. When the load on the number of workers gets to heavy we can always add an extra worker node to the Kubernetes cluster.

Another benefit of Zalenium is that you can view everything that is happening in the container directly from the grid via a so called Live view. With SeleniumGridExtras you could also view what is happening on the VM but not directly from the Selenium Grid console view. So you had to view what was happening directly on the machine by entering the IP of the VM in your favorite browser with a specific port number at the end that you specified when setting up SeleniumGridExtras. So viewing the test execution is way more easy with Zalenium. 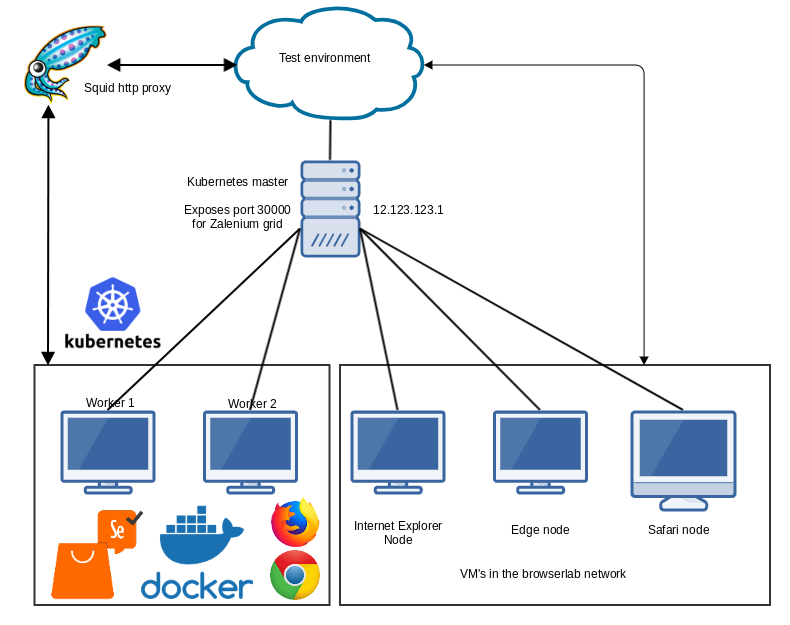 Because Zalenium is actually an extension of Selenium Grid we are still able to add other nodes to grid. In this case we can still add a number of VM’s to the grid that contain IE and Edge. Next to that we still add our macmini’s to the grid so we can test Safari.

Because having just one machine that should do it all is not optimal we have installed a Kubernetes cluster. This way we can distribute the containers over multiple machines. For now we have one master and two so called workers (slaves, minions or whatever you like to call it). Setting up and adding an extra workers is pretty easy. A prerequisite is that docker is installed. If you do not have it installed already, you can do so by executing the following:

Installation on master and workers:

After that, add the Kubernetes repository and install Kubernetes:

Next, disable swap. Kubernetes does not work when not having swap turned off.

With Kubernetes installed on all machines, go to the machine that will serve as the Kubernetes master and execute the following command:

When this completes, you’ll be presented with the exact command you need to join the nodes to the master. This will look something like this:

To install a communication network between the master and the nodes we choose to deploy the pod network weave. You can install it with the following command.

The master should now be ready to accept worker nodes.

Next we can let the worker join the Kubernetes network by adding it via kubeadm join. You do not have to do this for the master. The following command is an example and should be corrected to have the right IP and join code.

To verify that all workers have joined the cluster you can check with the following command on the master.

The configuration of the Squid Proxy Server is handled in the /etc/squid/squid.conf. I will show you how to configure a very basic proxy server. The first thing we need to do is uncomment the line (by removing the # character):

To find that line, issue the command:

As you can see (Figure A), the configuration option is found on line 1186 (of our installation). Open up the squid.conf file for editing, with the command sudo vi /etc/squid/squid.conf, and scroll down to that line and remove the # character.

Next you want to look for the line:

There will be a number of them (for different network IP schemes). You need to remove the # character at the one that matches your network or create a new one (in our case 12.123.123.0/24) and alter it to your needs.

Restart squid with the command:

That’s it. You now have a basic proxy server up and running on port 3128 and the IP address of the system you just installed Squid on.

Creating a deployment and service for Zalenium

So for Zalenium we use two YAML files which you can simple copy and paste in a vi editor on your master.

In the ‘env’ sections you can set the properties of the proxy server.

Next we need to bind the default role to the cluster so Zalenium will be able to deploy its own containers used for Chrome and Firefox.

You can now create the deployment and service by running the create statements in the following order:

If you make any changes to the service or deployment YAML you can just simply apply the changes by executing:

Now you can use the Zalenium grid and start testing. If you already used a selenium grid you can change your endpoint to the ip adres of the Zalenium master and the port 30000 (in the above example http://12.123.123.1:30000/wd/hub). Otherwise you have to point them to the grid with your testautomation tool of choice.

And your done, Happy testing!